by Andromeda at 9:15 PM (2,037 Views / 0 Likes) 0 Comments
Square Enix just announced that players with currently inactive accounts for FFXIV will be able to play again this weekend in the hopes of letting him experience the new Patch 2.1 content released three weeks ago. Starting Saturday January 11th midnight PST, players will be able to return to Eorzea. The only conditions are that you've purchased the game and the account is currently inactive, being a subscriber is not a requirement.

Everyone that owns a PS4 will get immediate access to the FF XIV: A Realm Reborn Beta

by Fuzz at 10:29 PM (2,801 Views / 0 Likes) 1 Comments
If you own Sony's next-gen console, the Playstation 4, you are in luck! All owners of the PS4 will receive access to FFXIV: A Realm Reborn Beta regardless if you have an account or not! You don't even have to have a Playstation Plus account. All you need is a PS4 and the Internet and you get access to Beta.

Square Enix plans on releasing the Beta on Feb. 22, 2014 and is not restricting the amount of players that can join at once.

by Andromeda at 7:39 PM (2,251 Views / 0 Likes) 0 Comments
From December 18th through to December 31th the Christmas spirit will be visiting the cities of Eorzea. In each of the cities, decorations have been put up to celebrate the time of the year, even snow falling. Adventurers will be able to help out in protecting snowmen from the dangerous and mischievous imps threatening to melt all of the fun away. Victory for the adventurers will give them the choice of seasonal treats or equipment.

A guide is available for the event.

by Andromeda at 5:07 PM (2,845 Views / 0 Likes) 0 Comments
There are even more changes and added features that don't group up with anything else. There are a lot of more changes to the systems and even achievements. The biggest new features here are the Duty Roulette and Party Finder allowing people to setup more customized runs on dungeons with specific goals in mind.

Duty Roulette has been added to the Duty Finder.

You may now register for duties at random from among those you have unlocked. Successful completion will earn you greater rewards than normal. Moreover, a bonus will be awarded once per day for participating in each category. Furthermore, should your role be in short supply, you will be awarded an additional bonus for being an adventurer in need.

Duties are divided into the following categories:

by Andromeda at 5:06 PM (5,223 Views / 0 Likes) 0 Comments
Most combat classes/jobs have received some changes with some of them announced earlier. The biggest changes are for Warrior and Dragoon, but Bard, White Mage, Black Mage and others have all received some changes to their abilities/skills. In general, Warrior, Paladin, Monk and Dragon have received buffs to their jobs. In general, Bard, White Mage and Black Mage have received debuffs to their jobs. Arcanist and Scholar are a little more mixed. For more specifics on how this will affect your chosen jobs look below.

The following changes have been made to actions and statuses:

Class
/JobSkill
/StatusChanges
PaladinCoverRange has been extended from 6y to 10y.
Shield OathEnmity generated has been increased.
PugilistBootshinePotency has been increased from 130 to 150.
True StrikeDelivering the attack from behind will no longer increase critical hit chance, but will instead deliver an attack with a potency of 190.
Internal ReleaseCritical hit rate increase has been reduced from...
Click to expand...

by Andromeda at 5:05 PM (8,228 Views / 0 Likes) 0 Comments
Housing has been had one of the bigger question marks in the patch mainly because it was not decided until recently how expensive they would make housing. The notes go into great detail on the housing prices. There are several things to remember with it. You need to know what server you're on as the server changes the price, non-legacy versus legacy and even population. The TFF Server Ultros is one of the more expensive non-legacy servers, likely due to the high population of the server. There are also 5 rankings for plots of land which change the cost and the cost will lower every 6 hours for a total of 360 times. So unpurchased land will get cheaper. However, land will still be very expensive even the cheapest is 4 million gil with the most expensive being 625 million.

Free company housing has been added.

Free companies can now purchase an estate, upon which a hall can be built, in any one of the three residential districts regardless of Grand Company...
Click to expand...

by Andromeda at 5:03 PM (4,297 Views / 0 Likes) 3 Comments
There is naturally a large amount of new items available. There are new Grand Company items along with new ranks. There is a lot of new gear (many PvP), along with new mounts, new minions, new housing and furniture. Here is the very long list. There are also many changes to gear for item level, displaying items, recipes, more items can be stored in the armiore.

The following company seal exchange items have been added:

by Andromeda at 5:02 PM (7,294 Views / 0 Likes) 0 Comments
The treasure feature added will include both battle classes and gathering classes. Gathering classes will find maps that the battle classes will then use to locate treasure and fight the monsters. There are 5 ranks of maps. Maps can be sold so long as they have not been activated. Rank 5 maps will require a party, so it is important to remember when running it. Locating maps by the gather will be limited to once every 18 hours.

Treasure Hunt has been added.

In the course of gathering, Disciples of the Land will now be able to obtain items known as timeworn maps. These maps can then be used to reveal the location of hidden treasures.

1. Obtaining a Timeworn MapUpon accessing gathering points at level 40 or above, Disciples of the Land will, on occasion, obtain a timeworn map. 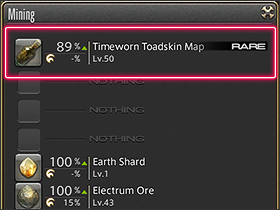 Upon accessing gathering points at level 40 or above, Disciples of the Land will, on...
Click to expand...

The Wolves' Den PvP arena has been added.

The Wolves' Den allows players to do battle with one another within an instanced battle arena.

To gain entry into the Wolves' Den, players must first complete one of the following quests depending on their Grand Company allegiance:

Order of the Twin Adder

by Andromeda at 5:00 PM (2,586 Views / 0 Likes) 0 Comments
There are a lot of changes to existing content in game. Here is where I will list all of the changes. There are changes for Guildleves, Guildheist, FATEs, Dungeons. There is a long list of changes for Guildleves specifically experience earn or gil. There are some new Sanctuary added, some Mor Dhora expansions and the tomestones for mythology has been confirmed to be 450 now.

The following changes have been made to guildleves:
EXP and gil received from battlecraft leves have been increased.

The Armoury bonus will now apply to EXP received upon completing battlecraft leves.

Completion bonuses received from battlecraft leves have been increased.

New tradecraft leves have been added.

New item rewards have been added to certain tradecraft leves.

EXP awarded upon completing certain tradecraft leves has been increased.

Bonus EXP awarded for handing in HQ items for tradecraft leves has been decreased.

Gil awarded for completing fieldcraft leves has been increased.